As you may or may not know Lithium-ion battery technology is fast becoming very popular, particularly in the materials handling industry. This is mainly due to the many benefits it brings in increasing efficiency and saving on costs.

Toyota have been providing lithium-ion battery technology on a key range of warehouse trucks and electric forklifts since 2013, however, in April of this year we revealed that we had established our very own lithium-ion battery system that offers a further series of benefits.

What is Lithium-ion technology?

Lithium-ion technology is of the greatest benefit to multi-shift operations in which trucks are running for extended periods and breaks allow for adequate recharge periods. This is due to the higher power capacity of li-ion batteries over that of a standard lead acid battery. In most operations, lead acid or gel batteries are used which require a recharging period of between 6 and 12 hours, this limits the possibility of continuous use. The battery change method is generally used to overcome this; however this can be costly and also requires availability of a large space to house the battery change station.

Lithium-ion batteries have the ability to be recharged in as little as one hour, using up to 30% less energy to recharge, improving overall truck availability. As these batteries allow for opportunity charging, battery change may no longer be needed, and neither are spare batteries or charging rooms. Trucks can be recharged quickly by the operator during breaks or periods of downtime, the key is to ensure chargers are conveniently placed such as near canteens to promote a new culture. The only downside to this is that this may incur infrastructure costs; which is something that needs to be investigated when considering switching to lithium-ion. 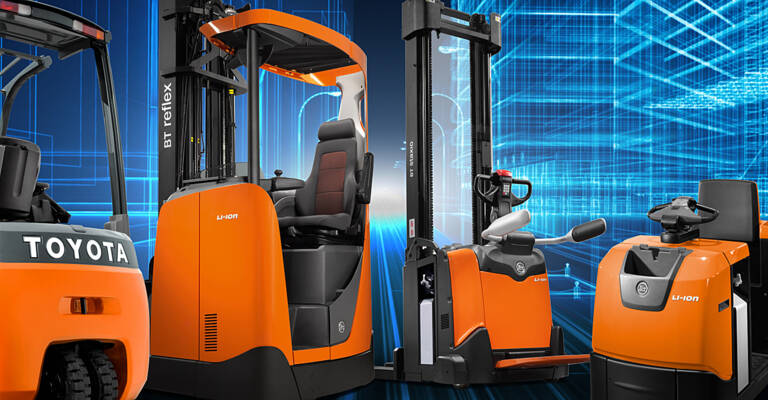 We have established our own modular design concept using our own cells, and the key differential to this approach is that the concept is based on cell modules. The capacity of the battery is determined by the number of modules used, which is configured to match customer requirements. It can also be easily replaced with a corresponding module, a task that can be easily accomplished by a Toyota technician, reducing the risk of downtime.

What are the benefits?

For more information about lithium-ion and other new energy solutions such as hydrogen fuel cell technology click here, or call 0370 850 1409.